While there is still an abundance of fresh produce available, give these small jewels a try! The filling is so delicious!

It’s been awhile since my last post and it’s hard to believe that we are done with the summer break! The boys were staying home and keeping us busy with their summer birthdays, camps, playdates and some traveling. We had a great time with our cousins while camping in Clearlake, CA. Clearlake is the oldest lake in California, about 2.5 million years old but only 30 feet deep in the deepest part. Because of that the water tends to be warm and slightly green (unfortunately) during the summer months. Nonetheless, the kids swam a lot and even our dog, Kona discovered she likes to swim, too!

At the beginning of July I happened to watch a Netflix documentary “What the Health?” and it is a great eye opener. It explores the correlation between dietary recommendations from the National Cancer Institute, American Heart Association, American Diabetes Association and their sponsors. When you look at the suggested recipes available on their websites it will be no surprise that Bacon Wrapped Shrimp is there if you realize that meat producers are some of the sponsors. Several well known “facts” are debunked there as well. I highly recommend you watch this documentary and start a 1-month Going Vegan Challenge! So far, it has been a great way of eating for us. Stay tuned for more updates! If you don’t have Netflix, the movie can be seen online http://www.whatthehealthfilm.com/.

Today’s recipe is not only vegan but it is just delicious! Indian eggplants, which are about the size of a large plum, are stuffed with the most amazing filling and then cooked until they are soft. The filling is made out of sesame seeds, peanuts, turmeric, garlic, brown sugar and cilantro. It is sweet, crunchy with a touch of heat. Really good!

I have seen these small eggplants before but never cooked with them until a few months ago I spotted them at my favorite market again and decided to give them a try. After searching for an interesting recipe I found one on Mark Bittman’s website.

Start by combining filling ingredients in a food processor: sesame seeds, peanuts, brown sugar, few cloves of garlic, some turmeric and cayenne pepper, salt and lots of cilantro. If cilantro is not your thing, use fresh parsley.

Transfer into a bowl and set aside. 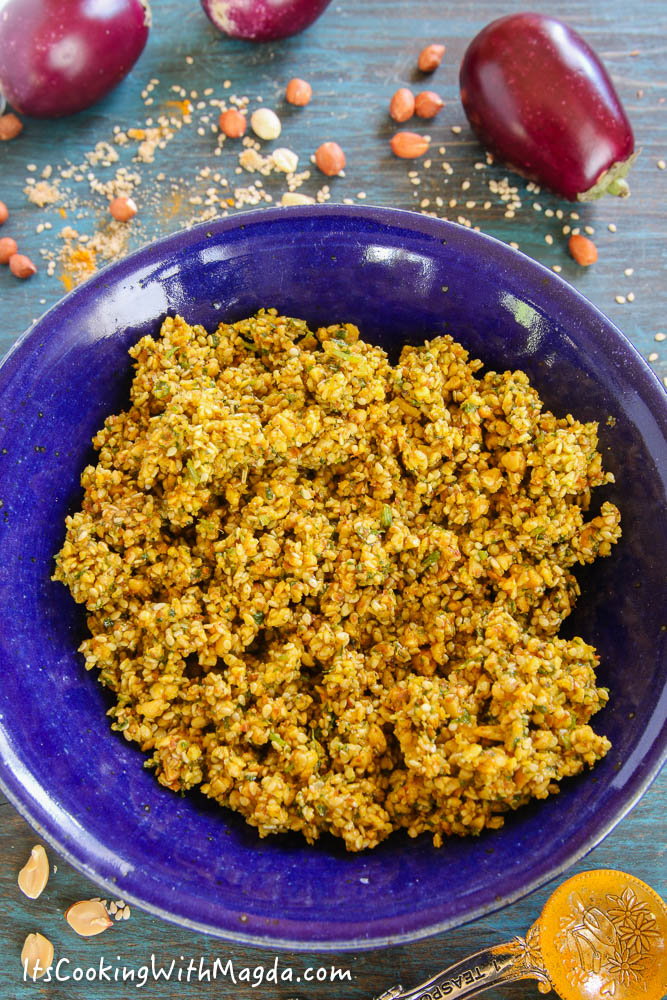 Next, start prepping the eggplants. Trim the leaves around the stem using scissors or your fingers.

Using a sharp small knife make a cross incision on the other end of each eggplant leaving about half an inch of space away from the stem.

Using a small spoon, stuff the eggplants. Gently open the sides and push the stuffing all the way down on all 4 sides. Squeeze the stuffed eggplants lightly to make sure the stuffing sticks. Repeat with remaining eggplants.

In a frying pan heat up 2-3 tablespoons of olive oil and add the stuffed eggplants in a single layer leaving some space between them. Fry them for 4-5 minutes, turning often using kitchen tongs. Some of the filling will escape but that’s ok. Add water into the skillet and cover. Cook the eggplants for about 15-17 minutes or until soft and cooked through. Remove them onto a serving plate and cover.

If there is any liquid left on the skillet along with some of the stuffing, cook it away. Turn the heat up and let the water evaporate. This step will make the extra stuffing super crispy and delicious. 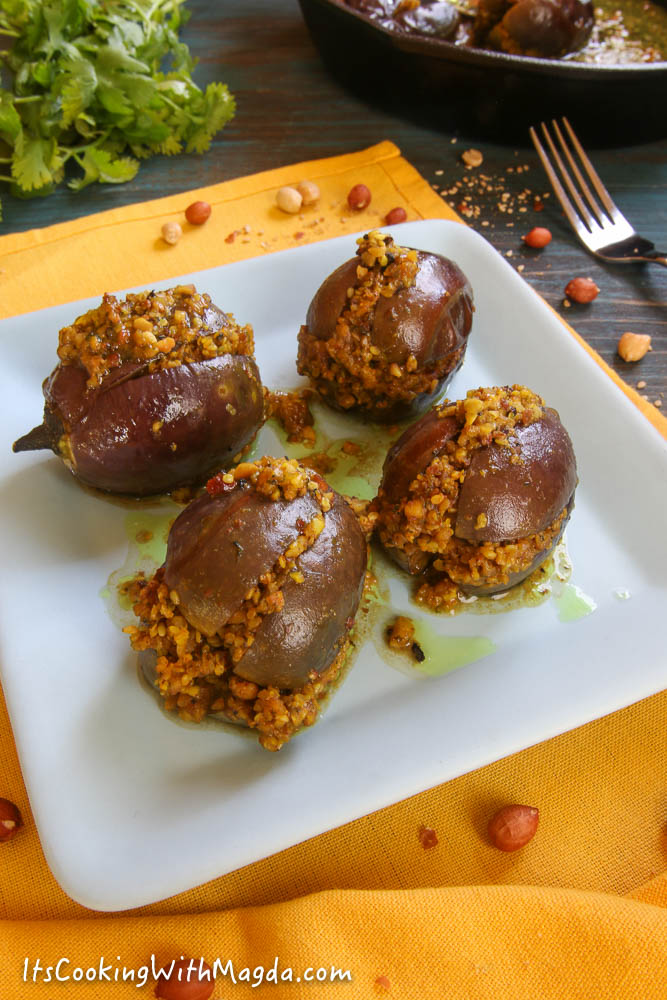