Chocolate and fruit is a combination made in heaven! Try these decadent chocolate cupcakes with raspberry buttercream and get a taste of heaven!

Do we need a reason to eat a delicious cupcake? I don’t think so! Valentine’s Day is fast approaching and a lot of people are trying to think of something tasty to prepare for their SO. I don’t think these Chocolate Cupcakes with Raspberry Buttercream should be made as a dessert only for Valentine’s Day. They are way too good to be eaten once a year! Make them for a special occasion and no occasion, because it’s Monday or it stopped raining.

These cupcakes are very moist and full of chocolate flavor. The buttercream gets its color and fruity notes from raspberry puree. It perfectly compliments the rich chocolate flavor of the cupcakes.

Start the recipe by making the cupcake batter. When baking, it’s important to have all of the ingredients at the room temperature, unless specified otherwise. So make sure to take the eggs and butter out of the fridge about 30 minutes earlier. You can warm the eggs up by placing them in a bowl with warm water for about 10 minutes.

The recipe calls for 1/3 cup of Dutch-processed cocoa which is different from a natural cocoa powder. Typically, a natural cocoa powder is slightly acidic with pH around 5 ( the pH scale goes from 1 to 14 with 1 being the most acidic, 14- the most alkaline and 7 being neutral). The Dutch-processed cocoa has a neutral pH that comes from added an alkalizing agent. The process was first developed by a Dutch chocolate maker, hence the name.

When comparing both kinds of cocoa powder, the differences are in color and flavor. Dutch-process cocoa powder is much darker and has a stronger chocolate flavor. So, it is a matter of personal preference. One thing to remember is that since the Dutch-process cocoa has a neutral pH, it requires baking powder as a leavening agent, not baking soda, which requires acidic pH. This recipe, however, calls for baking soda but we will add 2 teaspoons of vinegar to make it work.

While cupcakes are baking in the oven you can start making the buttercream. I used frozen raspberries that were defrosted and strained through a fine-mesh sieve. If using fresh raspberries you might want to use a food processor first to puree the fruit. Alternatively, you can put the raspberries and some sugar (around 1 Tablespoon) in a bowl, mash them with a fork and let them sit until some juice is released. Then strain the mixture.

When making the buttercream, make sure the butter is soft. Otherwise, it won’t get fluffy and creamy. Start by creaming the butter in a mixer for about 3 minutes, then add powdered sugar, egg yolks and vanilla extract in stages. Mix it all together for another minute or two. Next, add the raspberry puree and mix until everything is incorporated and has a nice pink color. 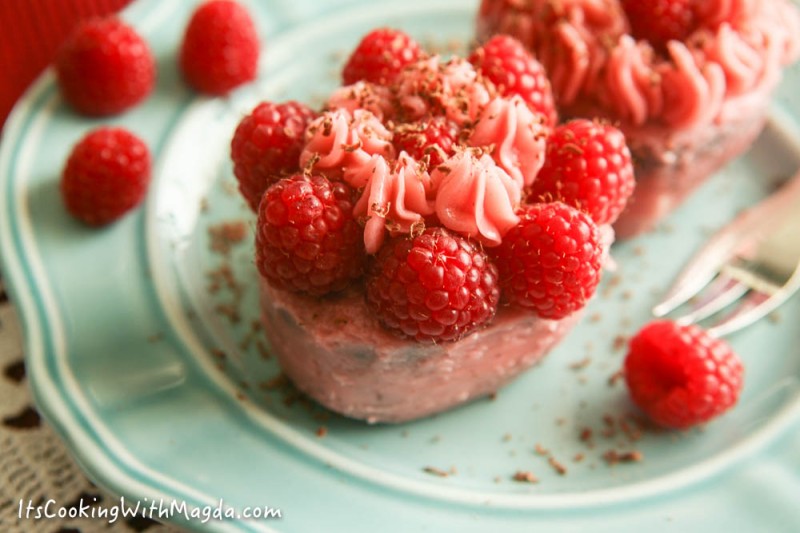