The last couple of days have been difficult here as we, very suddenly, lost our dog, Leo. But let me start at the beginning.  About 12 years ago, shortly after arriving in the U.S, I adopted Mona, a Dalmatian/Border Collie mix. A few months later I met my husband, Jud. After returning from our honeymoon it seemed that Mona was bored and we decided to give her a companion. So, in November of 2005 we adopted Leo, a Lab/Pit Bull mix. He was a very sweet puppy… full of problems. He not only was scared of things like shiny floors and car alarms but also had severe skin allergies and required a daily dose of prednisone to stop itching. He loved chasing the ball, table food and whatever the kids left within his reach ( half eaten apples, banana peel or unfinished pancakes left on the kitchen table). Sleeping on the couch, too. Mona and Leo were such a pair, her being like a lady and him, well like a tramp. She was his big sister who really helped him with a lot of his insecurities. Then, sadly Mona got a cancer. For a very long time she was doing fine but unfortunately last December we had to say goodbye. It was an extremely difficult thing to do when we had to call a vet to schedule a home visit. But we really understood that her time has come and we didn’t want her to suffer. So, on December 23 the vet came and helped her carefully fall asleep forever…We had 12 beautiful years together. 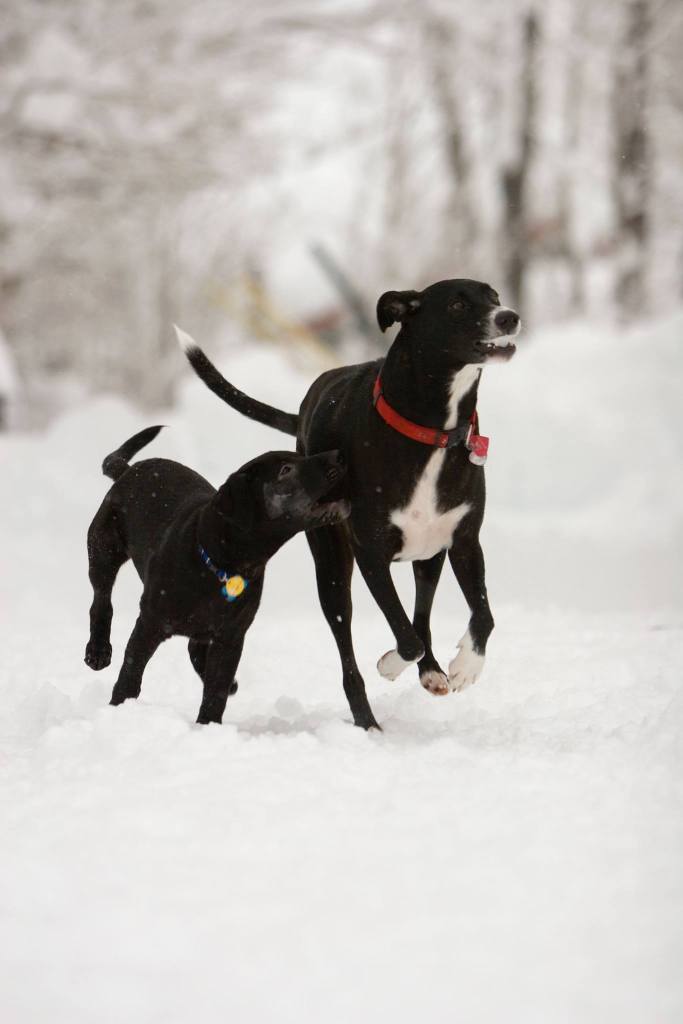 After her death, Leo changed. He no longer seemed to be the puppy. He was more and more mellow. Since both of them used to get some table scraps with their dinner, I remember thinking that now, since she is gone, Leo will probably get really fat. But, instead, he started loosing weight. There was always some food left in his bowl and even bits of cookies left by the kids weren’t licked off. Then, very recently I’ve noticed a bump and some swelling in his groin area. While petting him under his chin I felt his lymph nods were enlarged. On April 1st we saw a vet and within few minutes I was told he had lymphoma (lymph nodes cancer). I left him there to get several tests done and went home devastated. When I picked Leo up that afternoon he gave me some tail wagging but it was clear that he was feeling terrible. The next day the vet called with his blood tests results and it turned out Leo’s kidneys were failing him big time. He was dehydrated and full of toxins since his kidneys were not working. We had an option to try hydrating him through his skin to see if he would feel better. We did that but on Friday morning Leo was really sick. With the heaviest of hearts we made the decision to let him go. We spent the rest of Friday cuddling with him, feeding him some hot dogs and crying. Later my husband took him to the vet. I will never forget the way Leo looked at me from the car. He was in a lot of pain and had very sad eyes. But I think, I know, there was also love and gratitude for rescuing him 10 years ago and many times throughout the years. He really taught us about unconditional love and friendship. How I miss him! ( I was hoping today would be the first “no crying” day since he passed, but no). Rest in Peace in Doggy Heaven, Leo!

This salad is very easy to put together. Simply peel and slice an avocado and orange, place them on top of few handfuls of sunflower shoots and pour the dressing. Sprinkle with some hemp hearts. Serve!

Begin by cutting off the top and bottom of the orange. Next, cut off the peel and white pith while turning the orange on a cutting board. Cut the orange across into slices, then halve each slice.

Cut avocado in half. Peel one half, then slice it.

Put  2-3 handfuls of the greens into two separate salad bowls. Arrange the slices of avocado and orange on top. Sprinkle with some hemp hearts and drizzle some dressing. So simple and easy! Tastes great, too.